After dedicating my last couple of posts to aging, I figured now would be as good as any to write about my “midlife crisis.”  I put that into quotation marks because I am only 37 and it seems a bit absurd, but after some lingering feelings and a Google Search, I have self proclaimed my state as that.

About 7 months ago, I woke up from an afternoon nap/dream in a sudden panic.  I never could remember the details of my dream, but the aftermath of this particular dream has haunted me ever since.  When I woke in that sudden state of angst it was because I had been hit with the realization that I will not be here forever.  I have an expiration tag.

Now, this knowledge is not something that is new to me.  I am very well aware that none of us are making it out of here alive.  But whatever occurred to me during and because of this dream, made me acutely aware of this mortal fact.  And it has effected me in such a way that I have since felt anxious, fear, and sadness.  Not constantly, but it’s there.  I definitely feel it’s presence.

It’s weird, but Dale’s death made me fear death less than at any other point in my life. Perhaps it is because Dale’s death in someways defined death to me as a silence.  Dale was silent.  His memory lives on with us, but he was silenced from making any new memories and with sharing anything with us any more.  As horrible as that is, I also told myself that Dale was at peace. That helped to soften the blow.  Hell, I told myself anything and everything at that point to soften the blow, including the fact that everyone dies.  However, when I told myself that just 4 years ago, it was a comfort to my situation.  Now, it’s the core for my midlife crisis.

There have been quite a few deaths in or close to my family in the past few years.  Obviously, Dale, my uncle and my grandmother hit closest to home.  However, I have seen a handful of my father’s friends pass away in the past few years as well.  My father is 66 years old.  At one point, he had a lot of friends.  Now, there is just one left (besides himself) from his core group of friends that he grew up with and knew his entire life.  John’s father is also 66 years old and lost two of his best friends in this past year and is coming to the same situation as my father.  Selfishly, I am happy that my father is still among the living.  But I can’t help but to wonder what that does to a person.  Life is a game of chance, a Russian roulette.  And if you are lucky enough to escape sickness, an accident, or any other life ending event… at one point, you will find yourself left behind by so many that were once so near and dear to your heart.

My grandmother will be turning 90 in March.  Time when you are older, is much like time with a baby.  So much can happen is such a short amount of time.   My grandmother now is nearly blind.  Her hearing is going as well.  Along with losing sight and sound, she has also lost her spunk.  She is still capable of living alone, but it’s not so much that she is living alone (widowed twice, she has for over 35 years), but she feels alone.  Her inability to see and to hear well has closed her off to the world.  This summer, while she was at my son’s family birthday party, I saw her break down in tears out of frustration because her body is not letting what her mind is still capable of doing.  Mentally, she is still all there.  She is amazing.  But her physical limitations are taking a toll on her mentality.  It was heartbreaking to watch this.  And it only fueled the flames of my own mortality issues that had only recently surfaced.

I have never been a numbers person as far as the number on the scale.  But I have always been a numbers person as far as age.  This past December, I turned 37.  (I know 37 is still young in the grand scheme of things, but I remember when my father was 37.)  As far as 37 goes, and looks, I am holding my own, quite well.  However, I can’t help but to compare myself… to myself.  And I have noticed some changes that I feel really s

tarted about two years ago and that I have been in complete denial about.  The first one being my weight.  I’ve noticed a change in my body and how food effects me about two years ago.  I haven’t done much about it, being in a state of denial, but I have gained about 8 pounds in the past 2 years.  That may not sound like much, but I have been a consistent weight my entire life.  And I am attributing the change in metabolism to aging.  While I don’t feel like I have lots of wrinkles on my face, I am starting to see how I am going to age.  Do you know Droopy?  The Looney Tunes Dog?  I’ve always had “chubby” cheeks and I am quite positive they are going to droop.  I can see the very beginning stage of it, and my mother has it too.

I’ve also been obsessed with my teeth!  (Sounds like I’m a hot ass mess, doesn’t it?)  I hate the dentist. Every time I go, I have a new cavity.  I’m at the point where I don’t even think that’s even possible.  But each time they find a new tooth with a new cavity.  Fortunately, I still have all of my teeth.  But I fear losing them.  I really do.  I have cut down on sugar.  I brush.  I floss. I use ACT.  But it’s still the same every time I go.  It’s going to be a very sad day for me with I lose my first tooth.  Unlike my six year old, I know there isn’t one waiting to replace it.  Again, aging!

You know the saying, “Don’t regret growing old, it’s a privilege denied to many?”  There is a beauty in that saying.  It is very true.  I do hope that I am one of the lucky ones who gets to grow old.  However, I cannot deny what I am feeling at this moment.  This fear that I have stems moreso from aging than actual death itself.  So, I have declared myself in a state of mid-life crisis, at the age of 37, which if you ask Google, isn’t so uncommon.  What may be odd is that I feel like I am going through a man’s mid-life crisis (almost to a tee! ) as opposed to a woman’s mid-life crisis (almost none of those!) 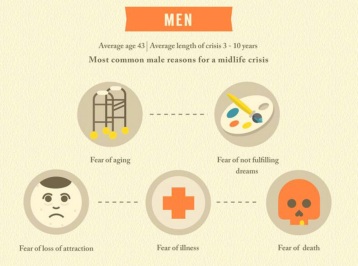 All I know is that whatever this is, it isn’t stopping me from living my life.  Some of the fear and anxiety has crept in and has taken away some joy, I must admit.  But… I’m just hoping that  this only happens once in a lifetime.  I am paying my dues now.  I can’t help but to wonder if this is hitting me at an earlier stage because I have been somewhat aged by my experiences.
Is anyone else going through something similar to this?  Please share.  Just reading that people in their 30’s can go through something like this has made a huge difference… it’s not just me!

5 thoughts on “My Midlife Crisis”